Guide: Do Doorbell Cameras Record All The Time?
GetLockers

A video doorbell camera, or simply video doorbell is the latest craze for smart and high-level home security. Many are yet to embrace the technology as we’d hope, for sure. But for those who have, they definitely have everything to smile about.

Just as the name, a video doorbell comprises a doorbell with a built-in image sensor like that of a security camera system. Hence, allowing it to deliver its duties as the ordinary chime while at the same time keep an eye on your front door.

Even better, these video doorbells have a built-in Wi-Fi tech that makes it possible to transmit the footage wirelessly. So, one doesn’t need to be at home to see what’s happening around the main door. With wireless connectivity, it means you can remotely access your doorbell via your smart device. And in case there are some moments you missed, you can playback the video history at any time.

In other words, video doorbells are more like Wi-Fi wireless security camera systems. But as we discussed the other day, the average surveillance camera can record continuously, by the time scheduled, and or by events. So, do doorbell cameras record all the time or by the other two methods?

Well, this now brings us to our main topic of the day, whereby we’ll discuss the recording and recordings of video cameras. We’ll also look at some of the key features that can help ensure you make the most out of your device.
Before we come to any of that, however, let’s briefly highlight some of the best video doorbell models that you can grab this Black Friday season.

How to save Ring doorbell video without a subscription

What to Look For In Smart Video Doorbells

The following are the various key features to consider when searching for a perfect video doorbell.

The right camera resolution is a must if you would want to see what’s happening on your property and in rich details. As a rule of thumb, the higher the resolution, the sharper the captured images. Some doorbell cameras even possess advanced features like HDR that helps balance the quality of the footage in bright and dark areas.

This one helps ensure you have 24/7 security at your door- be it the day or night. It’s very crucial as it makes it possible for you to see clearly even when it’s dark out.

In general, this is the measure of how wide the camera of a doorbell can see. It’s also very important as it determines the maximum ground or scene of your front yard you’ll be able to monitor.

A wide field of view, like 180°, is usually better as the camera can see everything in front of it. However, some camera lenses are 90° wide, which means they can only see what’s in the front and a bit to the sides.

The whole idea of a video doorbell is for you to be able to answer your door more efficiently. So, the two-way audio is very crucial just in case you’re not nearby and you would want to speak with whoever is at the door.

Unlike the traditional doorbells that are hardwired to the house, smart video doorbells can also be battery powered. With the dual power source, it means that you don’t have to worry about whether there’s electricity or not.

This is yet another key factor if you want to remain in the loop, knowing every activity that happens at your front door. Thanks to the integrated motion sensors, the doorbell can alert you of someone approaching or leaving your door. And in case it has a super-wide field of view, you can customize the select zones to be monitored. Thus, minimizing the instances of unwanted alerts.

The main reason for ditching the traditional doorbell for one with a camera is so that you can hear, as well as see who’s at the door. So, the storage means can be very helpful in the event someone vandalizes or steal from your property.

Even so, most of the top doorbell cameras don’t have a built-in means to save the footage locally. The only notable brand that we can say supports local storage is Heimvision doorbell that does have a slot for a micro SD card. So, you necessarily don’t have to pay for the cloud even though it’s available.

For the others, including Ring, Arlo, and Google Nest, the providers only include the cloud storage option. Thus, you have to subscribe to one of the available smart plans so that you can have a video history of what had happened while you were away.

Do Doorbell Cameras Record All The Time?

Truthfully, this is one of those questions we answer with both NO and YES. This is so as the majority of the video doorbells record for short periods – otherwise called events. But there are several now available with the ability to record 24/7.

For the former, the doorbell will only record and save the footage if the eye senses some motion going on in the area. The recordings tend to be in small clips but long enough to identify what or whoever has triggered it.

For those who are okay with it, the short-event recordings don’t take up much of the storage. Hence, it helps optimize the limited space available and also increase the recorded days.

Regardless, motion/ sound-activated recording is not always convenient- even with the ordinary security cameras. Once an object crosses the camera lens, there’s usually a lag of a few seconds for the camera to wake up. So, there’s a possibility of it failing to capture the objects in motion.

This is where you’ll now wish your doorbell camera could record 24/7 as you would receive the push alert. Then, you log into your cloud and rewind the history to see what was happening.

How Long Does a Video Doorbell Record Continuously?

Technically, various video doorbell brands have different features and capabilities. So, there’s no specific maximum number of hours or days as to when a particular model can record. The overall period depends on a variety of factors, starting with the amount of space offered by the provider.

If it’s the Google Nest hello doorbell, for instance, the Nest Aware Plus plan supports up to 10 days of continuous recording. So, you can browse through your video history and see what had happened before, during, and after an event.

If you want to know what had happened ten days before, the Nest Aware Plus package includes 60 days of event video history. In which case now it’s the short clips saved after the Nest doorbell detected motion or sound around the area.

Which Video Doorbells Record All The Time?

Unfortunately, many of the video doorbells that we have at the moment often record events. Even the major providers like Arlo and Ring have not yet started offering continuous video recording support despite the widespread speculations.

Regardless, 24/7 recording requires a lot of power and storage space. Hence, a brand like Ring is easy to understand that the engineers are just trying to protect the battery life.

In any case, the video doorbells that are already offering 27/7 streaming and recording are only- ONE. This is the Nest Hello video doorbell that Google introduced in mid-2018. And as we’ve just mentioned, you must have an active Nest Aware Plus account to enjoy the 24/7 video history.

But if you feel the event clips are enough for your needs, you can opt for the standard Nest aware plan. Yes, the package has up to 30 days history (half the premium), but that’s pretty enough time for most of us.

Besides, the standard Nest Aware plan costs about half of the premium package. So, it’s cost-effective to have if you don’t want to overwhelm yourself with bills.

As an exclusive type of security camera, a video doorbell can be a great way to watch over your home secretively. The smart home addition can be your third eye, giving you the warm feeling that you’ll have something to look up for in case of an event.

Even better, all the latest video doorbells support two-way communication. So, not only can you answer your door from anywhere, but also you can scare away a potential burglar before stealing or breaking into your home.

Needless to say, nearly all doorbell cameras in the market only support event recording- after sensing movement or sound. Yes, it’s not that bad as not many intruders can discern as fast that there’s an eye watching. But for the cases where an object moves fast past it, the camera might fail to capture the crucial details due to the wake-up lag.

In any case, security cameras are now more accessible than before. So, you can have one/ multiple for high-level security and still get a decent video doorbell for the front door activity. 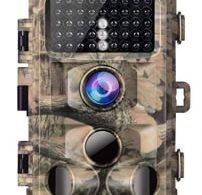 It would be a great feeling to capture wild animals’ habitat specially if you live in the... When shopping for a CCTV system, what should you look for? Is it brand popularity, affordability... 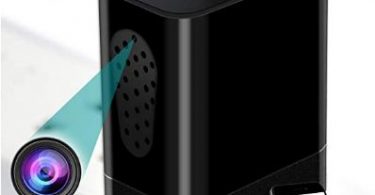 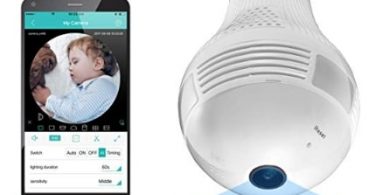 The best light bulb security camera 2022 should come in a design which is hard for potential...