3 Easy Ways on How to Jam Wireless Security Cameras
GetLockers

Is a wireless security camera worth it? A quick answer is a YES. It’s not only easy to operate but also can mount in locations inaccessible to cabled power. Hence, enabling you to watch every corner of your property without issues. In this article, however, we’re going to teach you ways on how to jam wireless security cameras, as well as prevent it. Why?

As more and more people embrace CCTV technology, “professional” burglars are taking classes on how to defeat it. Wireless cameras have the weakest link that’s easy to interfere with, unlike their wired counterparts that use a dedicated cable. But this isn’t to say a motivated intruder can’t jam your analog or PoE security camera if he wanted.

A wired CCTV can be jammed by simply tampering with cables connecting them. This can be done by cutting the wire for the video or that for the power if using a security camera system with DVR.

The worst part is that even after the burglar breaks into your property, the cables he has tampered with will need repairing. So, you might go another day or two without seeing what’s happening in those areas.

Meanwhile, WiFi and point-to-point wireless cameras don’t need data cables to operate. As was mentioned, this is very convenient as you can mount the devices yourself without hiring a professional installer. Also, if what you have is a battery-powered wireless security camera, you can mount it in any location since there are no wires to interfere.

But, sadly, a wireless signal is the easiest medium of communication to jam. You only need to know the frequency of the specific radio frequency (RF) and have a device that operates the same RF but with a stronger signal. This way, you can render that particular CCTV nonfunctional for a limited time until the jammer is disabled.

Even so, it’s right to say jamming a wireless camera is less brutal than with a wired system. Once the jammer is inactive, your security system will continue operating normally and won’t leave any repairs to do.

How to Jam Wireless Security Cameras

Overall, there are three different ways you can jam the wireless signal of a CCTV system:

In the method, you can only succeed if using a plug-in wireless camera. These types of cameras are common with wireless NVR systems and indoor standalone WiFi cameras.

Just like with the wired PoE or analog CCTV, you can disable the camera’s power by either cutting the cable or plugging it out from the socket. This will then shut down the respective device and prevent it from taking any footage.

But if the camera did have a backup battery, cutting the visible cable means you have only shut off the main power supply. So, the camera will still be active and recording everything within the range.

In this method, the trick involves creating a wall block between the camera and the control panel such that the signal doesn’t cross. If it’s cameras like Eufy and Arlo, the trick here is to cut off their communication with the Homebase hub. Then, for expandable P2P systems like Heimvision HM241A, the band barrier prevents the cameras from reaching the NVR.

But again, a wireless signal can only interfere with a device that operates at the same radio signal. The jamming signal also has to be stronger if it’s to overpower and block the camera’s signal. So, you must know the frequency your wireless security camera system is operating at and have the right equipment for a successful jam.

Nonetheless, many consumer electronic devices operate at 433MHz or 2.4GHz, which is not only susceptible to interference by many interference generators. But also other RF devices that we use around the house every day. Garage door openers, car remotes, two-way radios, and light dimmers are all examples of such devices. 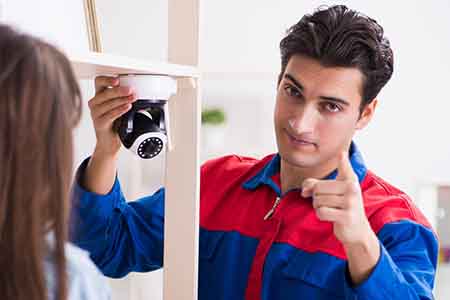 For something like a walkie-talkie, you can vary a wide selection of frequencies, including 433MHz. But since this device transmits at a relatively large amount of power, the control panel (Homebase or NVR) might not sense the cameras if they have a lower output.

In other words, your wireless CCTV should continue to operate if its transmission band is stronger than the jammer/ interference generator.

If your security camera system operates on a point-to-point connection, this hack won’t be effective. A deauthentication attack works on cutting the communication between the router and the wireless device connected. Some would say it’s a software bug, but it’s basically an “internet protocol” that tricks the router into disconnecting the connected devices. It’s something people even use in other real-life applications, like when you notice unauthorized devices are stealing your WiFi.

The greatest concern in this method is that if it’s a burglar who has initiated this hack, your entire wireless network could be compromised. So, a broken camera should be your least worries at the time- your deep privacy is in jeopardy.

Is It Illegal To Jam Security Cameras?

Regardless, the federal law prohibits using or even marketing any form of the signal jamming device here in the United States. It doesn’t matter if you have it for good or bad intent, the law is against all interferences of authorized radio communications. Only local enforcement agencies are exempted in limited situations as long they have applicable statutes.

One of the reasons the law is against signal jamming is because the interference affects not only security cameras but also other radio signals nearby. This includes the various wireless devices we use in day-to-day communications, as well as police radar and GPS.

Even so, this doesn’t mean wireless signal jammers are hard to get. As was mentioned earlier, even a regular handheld two-way radio could be deleterious if it has the frequency of your CCTV. The same goes for those wireless controllers we use on the gates, garage doors, or even automobiles.

Will I Know When My Security Camera Is Getting Jammed?

Sadly, it’s not in every situation you can tell your security camera is being jammed. Many of the systems in the consumer don’t have that advanced algorithm to alert when there’s signal interference. You’ll just realize that your camera has lost internet connection or else stops recording. But that doesn’t justify jamming as it could also be an issue from your service provider- either internet or CCTV company.

A great way you could tell there is an interference generator or device nearby is by monitoring the “noise level” of security cameras’ location. The noise in this case is not the audible sound, but the strength of an outside signal of a wireless device. It’s usually expressed as decibel-milliwatt, or simply dBm, and measured from 0 to negative 100.

But again, many household electronics that emit radio and microwave frequencies could also cause signal interferences. So, it’s also not 100% effective in detecting active jammer.

The only sure way that we can say can detect outside attacks and signal interferences is by using dedicated monitoring devices. A good example is Fingbox by Fing and xFi by Xfinity, both of which keep an eye on your network and the connected devices.

How to Protect Security Cameras from Being Jammed

At this point, you now know the various ways you can jam your wireless security camera, or rather how intruders will do it. So, what should you do to avoid being a victim of CCTV interference?
Well, the solution is just simple- solving the three ways of jamming a signal. That is:

Cutting off the power supply– Hide the wires

The intruder can’t cut off the power supply if he doesn’t know where to start. So, hide the security camera wires in the best way possible and also mount devices out of reach. You could even go with a battery-operated system that has no wires to worry about, plus you can easily hide with surroundings.

Unfortunately, signal jammers are not easy to jam. You can be able to detect them, yes, but the signal they transmit is far more strong than most consumer security cameras. So, the only true option to defeating the intruders with a jammer is with hybrid security cameras.

With this, we don’t mean the hybrid DVR (with analog and PoE technology), but instead, a wireless camera that supports frequency hopping. The technique involves a unique code that allows the transmitting and receiving devices to change their frequencies on the go if there’s a stronger signal interfering. So, the jammer won’t be able to intercept as the frequency switch often happens rapidly.

Also, it’s worth reminding that an intruder cannot jam your security camera if he doesn’t have its operating frequency. Therefore, do avoid installing branded security signs that will give away the brand and model of the equipment being used. The internet is currently the largest hub of learning, and with just Googling the model, a motivated burglar will get every technical detail of your CCTV.

The best way to address deauthentication attacks is by protecting your wireless connection with strong WPA2 or WPA3 encryption. On top of that, you should give your WiFi signal a long and stronger password that’s not easy to guess by including letters, symbols, and numbers.

Technically, wireless security cameras are what many have at home. Especially with the standalone models, many people find it easier to own, install, operate, and even have smart intelligence most DVR systems don’t support yet.

But then, every strong man has his weak points, and wireless cameras are no different. Like many other wireless devices, they are prone to signal jamming, which can jeopardize their performance and allow burglars to roam undetected.

However, our article has covered the three main ways of interfering with the wireless signal and how to resolve them. So, we hope you’re now set and ready to play chess in your favor.