How Long Does The Average Security Camera Store Footage?
GetLockers

Which is the best between cloud and local storage? Will I be able to review the past footage? Do I need external hard drive backups? How long does the average security camera store footage?

These are some of the questions you might have in case you decide to keep a watchful eye on your properties, but you’re new to video surveillance. Of course, there’s nothing to complicate. But if you’re to get the best out of your cameras, the recorded footage has to be securely saved. That’s for future reference in case you or authorities need to review a crime or other issue that might have happened.

Even in real-time surveillance, by the way, a recording security camera system can be very helpful in monitoring and discovering underlying threats.

For example, if the AI of the public CCTV detects abandoned luggage, the employees can rewind some seconds of the particular scene. Then, identify when and who left the mystery bag.

True, this is also a later time since you’re revisiting the past, but we wouldn’t exactly say it’s archival footage.
In any case, this post will cover everything you need to know about footage storage. This includes what often happens with the old footage and factors that affect how long the captured videos are stored.

In general, there are two means that you can use to keep the footage of your indoor or outdoor security camera system.

Just as the name, this process involves storing your digital data “locally” on physical storage devices like hard drive discs and solid state drives (e.g. SD cards). The digital data in this case can be either images, short video clips, or continuous video recording.

Overall, a security camera with local storage is the cheapest to maintain as there are no renewable subscriptions attached. It’s also easier and fast to access your footage since there’s no uploading or downloading involved. Furthermore, it guarantees you complete security control, including who can access it.

That said, though, local storage requires you to be physically present to review your footage. Also, the stored data can be easily destroyed on the occasion of an on-site disaster like a fire.

Meanwhile, Cloud storage revolves around storing your camera footage in an online space provided by a hosting company. It’s more like a computer hard drive disc, only that it’s not physical.

Cloud storage can be useful in the case where you would want to playback footage even when away. It’s also a great option if you don’t want to deal with the hassle of installing and removing SD cards from the camera. And then there’s the assurance that your data will still be available even if a disaster destroys your physical infrastructure.

Sadly, however, using the cloud means you have to team up with the hosting provider, then rely on their availability and security of your sensitive data. Also, almost all security firms offer their cloud services in the form of pay-as-you-use subscriptions. So, you have to be set upright on payments if you’re to get all the featured privileges. 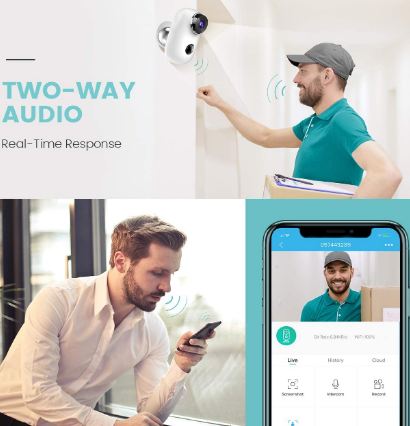 No matter which you choose, neither cloud nor local footage storage holds the footage forever- unless it’s a backup.
For the case of SD card (in standalone cameras) and hard drives (in DVR & NVR recorders), they all have limited spaces. To ensure you always have current recordings, therefore, you have to either be formatting the drives now and then or set the loop recording setting.

For the better, we’d recommend the latter option as even if you’re not there, your camera will store the latest captions. It’s the standard and certainly the easiest means of dealing with a full hard drive/ SD card.

In case you’re wondering, CCTV loop recording is when a camera records continuously by automatically overwriting the oldest footage with the new content.

When it now comes to cloud storage, most providers offer a specific timeline of when the footage will be deleted. If it’s Arlo Security Cameras, for instance, the brand offers between 14-and 30-day video history- either short clips or 24/7 recording.

With some providers, like Reolink, however, you can get up to 60 days of cloud recording if you choose the business plan.

Regardless, if the selected cloud plan becomes full or reaches the maximum record day, it will also start overwriting the oldest footages. So, it’s very similar to the local video storage.

Therefore, we can say the means you use doesn’t matter how long your security camera store footage.
But that being the case then, what determines the number of video recordings your hard drive, SD card, or cloud space can hold?

Factors That Affects How Long a Security Camera Stores Footage

Basically, the storage usage of a security camera is more like the bandwidth consumption rate when streaming or uploading. As such, you’ll notice the various factors here are very similar to those we discussed in our previous article- how much data does a Wi-Fi security camera use.
They include:

It’s common sense that the amount of storage available determines how long your security camera will record footage. But, luckily, this is not a major issue nowadays since most systems are coming with a larger capacity.

If the other factors, however, are past a certain limit, your footages eventually will end up taking more space. Hence, reducing the recording time.

This is the biggest topic and the most crucial aspect when it comes to the effectiveness of a security camera. It usually comes in the measure of pixels, in which case a high number of them delivers the best video quality.

If it’s 4K Ultra-HD, the total number of pixels is about 8.29 million, which is about four times that of 1080p Full HD. Thus, you’ll be able to see every captured object in vivid detail and clarity.

On the negative side, however, recording image/ video in 4K resolution will also require four times the amount of storage used by 1080p.

This is a method used to make large video footage smaller to lessen its bandwidth and storage consumption. While it was never a great deal sometimes back, most of the latest security cameras have high resolution and more advanced features. Hence, causing the picked files to take up so much storage space and reduce the recording hours.

This is also straightforward. Ten security cameras will use up more storage space than one or two models of the same specs. This is so as each camera does record as an individual, regardless of where you’ve placed it.

Various security camera systems have different means that they record footage. These recording methods can be continuous, motion/ sound-activated, or time scheduled.

By default, most expandable 16 Channel security camera system with DVR or NVR has continuous recording as the default method. The method involves recording videos 24/7, which means it will continue using space, whether there’s an activity or not.

Motion/ sound-activated recording, on the other hand, only saves footage when triggered by an object. So, it won’t use up any storage space if there’s nothing around the area.

In simple words, this is the frequency (or else rate) at which consecutive images appear on the viewing display. It’s usually expressed as fps, whereby some cameras can record as high as 60fps and others 25- or 30fps security camera.

Just like with resolution, the higher the frames rate, the clearer and consistent are the delivered videos. But similar to data usage, however, the high frames rate tends to consume more storage space than the lower settings.

Similarly, a CCTV system that has more capabilities will be using up more space than its peer with less. Even with bandwidth usage, you can’t compare the amounts from a basic model that only records video to a sophisticated design that has features like audio and advanced motion detection. The latter model will surely have a larger file and use more storage space.

While there’s no specific amount on how much storage space a security camera can use, the following Formula can give you an approximate estimation.

If the storage consumption for your security cameras is high, a lot of important data can be lost in a very short time.

Without a doubt, three days is so less when your cameras are in a sensitive area. In case you had traveled for five days, this is to say on Saturday you won’t know what had happened on Tuesday.

So, you need to check the above seven factors and adjust where possible if you need your storage to last longer,
For instance, instead of buying all 4K cameras, consider alternating with lower resolutions like 5MP or even 2mp. A 1080p video, by the way, is very clear and enough for most general security purposes.

Another thing, you can set your cameras to only record when there’s activity on your property- that means by motion detection. or else consider expanding your storage space if you would want to know everything that goes around your property,

In our previous Reolink vs Lorex comparison review, we saw the latter supports up to 24TB maximum HDD capacity. So, you can record up to 24 times the 1TB on our example above.